Dallas loves boy toys and movies. However, he also really loves girl toys and girl movies. We’ve gone through a Tinkerbell phase, a My Little Pony Phase and are currently storming a Barbie phase. He is just into characters and drama. Maybe he’ll get into acting someday, he has the dimples for it.

So now you’ll understand when I say the two boys and I were watching Strawberry Shortcake yesterday. Strawberry’s motto is, “If something doesn’t go the right way, improvise.” Or something close to that.

This recipe was printed in the San Francisco Chronicle on October 30th, in the food section. It comes from the book, “Maman’s Homesick Pie,” by Donia Bijan. Her story and recipes recall Donia’s childhood in Iran and the recipes that remind her of her mother.

Maman sounds like a gal that has plenty of time on her hands to roll dough, grind spices and finely chop dates. I ain’t that kind of maman. I had about an hour to do it all. Which, if you read the recipe will see is about the time needed for the dough to rest. I was able to let the dough sit in the fridge for about 12 minutes while I cut the dates and brought the brown sugar mixture to a boil. I grabbed a casserole dish, layered the dough, date mix and more dough, then baked for 10 minutes. Date bars in a flash. Or uh, kinda.

Let me show you what the date bars should look like: 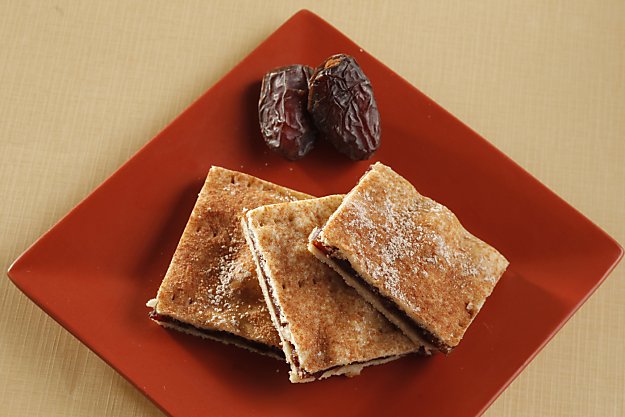 Let me show you what my end result looked like. (With a bit of vanilla yogurt, banana and walnuts for styling.)

Come back tomorrow to see the next installment of Movies & Meals. It is going to be a fun one! Here’s a hint, it started and ended in 1998. Curious? Good!