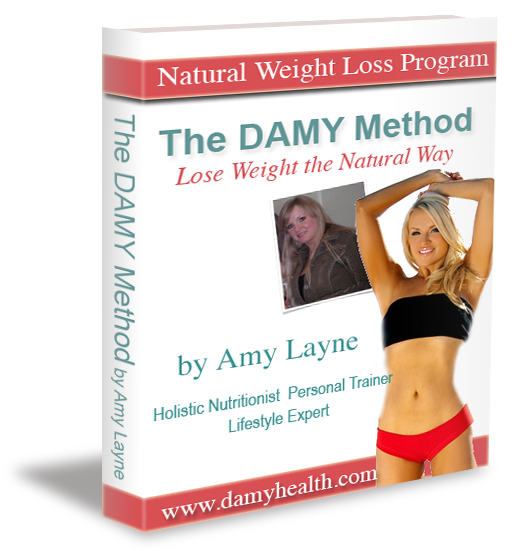 If you haven’t seen Amy Layne before, you might be thinking the same thing I did when I first saw her picture. I hated her. I had only seen her “after” picture and figured there was no way this chick ever struggled with weighing too much. I also ass-u-med that she was probably snotty and full of herself. This was last January. I feel bad now for even writing those thoughts for others to see.

Amy is sweet, like seriously sweet. She’s inspirational and full of love. Sounds barfy, I know, but she is a really amazing woman.

How do I know?

I’ve done her DAMY Method program and chatted with her via email each week.

I get her newsletters. I’m just going to put it out there that I gained back the weight I lost on the DAMY Method plan. Why? Because I totally went back to my old habits. Why did I do that? I don’t know! One week rolled into another and then through the gluten thickening forest of no exercise I slowly walked until BAM, tight jeans. Yeah, the jeans that were falling off in the spring. Dang Tina!

Tina, you fat lard, come and get some dinner! I know I have used Tina in the past, but it’s just so wonderful, isn’t it?

DAMY with me, Tina!

I have this in the fridge, waiting for tomorrow morning’s DAMY kick-off breakfast. It’s a jar of greek yogurt to soak my oats, with some freshly roasted pumpkin puree, fresh apples, agave nectar and chia seeds. You don’t have to eat weird concoctions like this on DAMY, I just want something different.

So, who is with me? This past February, I dropped 10 pounds in my first 4 weeks and had seriously loose pants. I’m trying to keep that in the front of my mind as Christmas food is quickly approaching. I have no desire to head into 2013 feeling the way I do now.

OH! I almost forgot to share the number one reason I chose the DAMY plan. She wants you to eat real food. Actual food. Not 100 calorie snack packs, not aspartame loaded Yoplait and certainly not prepackaged frozen meals. That, I totally appreciate. There are no powders or pills, special shakes or anything weird. It’s holistic, it’s seriously healthy and it is time. Come on!

The workouts are great, too. I totally enjoy strength training over cardio and was amazed at how well put together my 12 weeks of training were.

Like I said, I’m doing the DAMY Method, which is for people with more then ahem, 30 pounds to lose.

The most popular DAMY plan is the Bikini Body plan, which is for those who are serious about getting in the best shape of their life and are already familiar with eating healthy and exercising. Amy will help bring your workouts to the next level.

If you aren’t ready to commit, but want to get rolling on feeling better, at least subscribe to DAMY’s 31 Tips to a Healthier You!

If you are seriously that commitment-phobic and not even ready to receive emails, at least follow DAMY on Facebook. She has a bunch of bonus material right now to get you through the holidays, including a three week fat blasting program.

I’m going to need all the support I can get over the next twelve weeks and would L.O.V.E. to have some friends journey to health along with me? We can celebrate together around Valentine’s Day, when we are feeling great!  Click on any of the photos above, or the button on the right of the blog that reads, “Put down that burrito, girl!”